Hitler undoubtedly ranks as one of the most evil men to have lived. And perhaps this is the reason that this unusual myth has become so widespread – people love irony and it is very ironic that the man who slaughtered untold numbers of people would be an animal lover, a vegetarian, and a non-drinker. This truly is a myth There is  little merit to this myth in that Hitler did eat a lot of vegetable dishes and was advised by his doctor to eat a strictly vegetarian diet, but he was not particularly good at sticking to it. Salvatore Paolini, Hitler’s waiter said: “On the whole he never ate meat… but he did like sausages and ham” and this was also confirmed by his cook Dione Lucas who said that his favorite dish was “stuffed squab” (stuffed baby pigeon).

It is well known that Hitler is a vegetarian and does not drink or smoke. His lunch and dinner consist, therefore, for the most part of soup, eggs, vegetables and mineral water, although he occasionally relishes a slice of ham and relieves the tediousness of his diet with such delicacies as caviar, luscious fruits, and similar titbits. He is outspoken about having a sweet tooth and loves confectionery, especially chocolates.

Obviously the term “vegetarian” was less restrictive in days gone by.

As for alcohol consumption, Paolini also confirmed that while Hitler almost never touched the stuff, he did occasionally drink watered down wine with dinner and beer. Fine vintage wines were served at every important dinner Hitler hosted. While he may have generally preferred to abstain, he was certainly not one to force his dinner guests to do the same.

Adolf Hitler (1889-1945) was a smoker from 1897 - 1924, and had typical smoker symptoms. To refute that fact, a recently-invented myth is being circulated by tobacco apologists that he was a non-smoker! Over a half century after his death, this myth has been invented by people with an axe to grind. They hope that the truth has been forgotten, they hope people will buy into their disinformation.
People at the time, however, knew better. For example his teachers and
colleagues knew better.

At that time, in that 19th century era, it was notorious, widely known, that Germans belived in the so-called right to smoke, indeed, Germany was "the very land of smokers!"
When Adolf was a boy age eight, about 1897, the same year Iowa and Tennessee were banning cigarettes, he was in school in Lambeck. And because Germans believed in the so-called right to smoke, tobacco was widespread, little Adolf saw adults smoke, setting a bad example. He unfortunately followed their example, himself became a smoker.

Public record, data from before the myth, that's how we know Hitler was a smoker, and had started young.
Hitler and accomplices had a daily practice recorded in the period 11 Nov 1923 - 20 Dec 1924; they "would smoke and gossip . . .," says John Toland, Adolf Hitler (Garden City, NY: Doubleday & Co, 1976), p 203. Smoking from 1897 through at least 1924 made Hitler a smoker for at least about 27 years.
Smoking in fact increased in Germany after Hitler became Chancellor!! during half his term, the first six years (1933-1939, before the War (1939-1945). The tobacco lobby emphasized that it was an early and ardent supporter of his. Under Hitler, "the Nazis continued to supply tobacco to their troops."—David Spitz, "History," Time Magazine, 3 May 1999, p 16. Hitler thus cannot be called "anti-tobacco." 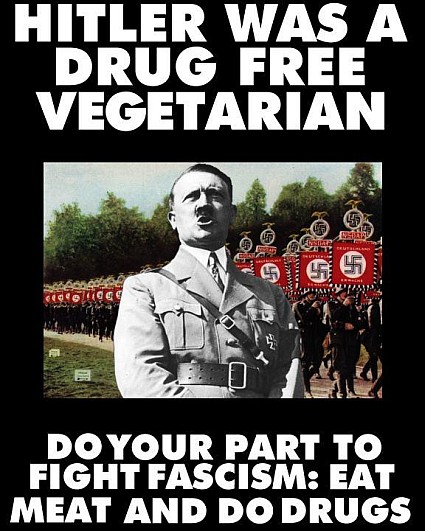 Anyone who hates dogs and kids can't be all bad

After 1945 Hitler was accused of every cruelty, but it was not in his nature to be cruel. He loved children. It was an entirely natural thing for him to stop his car and share his food with young cyclists along the road. Once he gave his raincoat to a derelict plodding in the rain. At midnight he would interrupt his work and prepare the food for his dog Blondi.....He could not bear to eat meat, because it meant the death of a living creature. He refused to have so much as a rabbit or a trout sacrificed to provide his food. He would allow only eggs on his table, because egg-laying meant that the hen had been spared rather than killed.

Here is a monumental, vastly revealing biography of Adolf Hitler - filled with brilliant, original insights into the familiar aspects of Hitler's life, and offering a wealth of new material only recently discovered and never before published.

These are just a few of the startling details you will encounter within the pages of John Toland's masterful, definitive work:

• Hitler was never a paperhanger or a house painter. But he was once a choirboy, who loved to read Westerns and play cowboys and Indians...
• He wrote several plays and the libretto for an opera. St. Joan was one of his favorite dramatic works, and he knew many of Wagner's operas by heart...
• Hitler was plagued by a paranoid fear of cancer and by a genuine heart condition. He was also a strict vegetarian...
• He could type, drive a car (barely), play the piano (somewhat), used an elastic exerciser to stay in shape, and, like Napoleon, had a photographic memory...
• Hitler was the first head of state to promote planning modern urban planning and anti-pollution devices in cities...
• At least four women attempted suicide over Hitler, and at least three succeeded...
• The "Jewish question" was a long time obsession which directly or indirectly influenced almost all of his political and military strategies...
• Hitler was the central architect of the Final Solution, and some of its methods were inspired by the U.S Government subjugation of the American Indian...
• The Nazi laws defining "Jewishness" were carefully drawn to exclude both Jesus Christ and Adolf Hitler, who feared that one of his grandparents might have been a Jew...

Although much has been written about Adolf Hitler, he remains a creature of legend, myth, and misconception. . . .

Only in recent years have those who knew Hitler personally been willing or able to talk freely about him. John Toland has based this monumental biography on extensive research, involving a number of previously unknown or unavailable sources, and including over one hundred and fifty taped interviews with people directly involved in Hitler's private and public life. The result is a portrait of Hitler - as man, politician, and military leader - more complex and comprehensive than any ever before published.

With a masterful command of history, Mr. Toland has revealed Hitler within the context of the time that made him. The figure that emerges from these pages is in many ways more frightening than the traditional demonic caricature - for Toland has given the demon a human face. There are startling revelations in this book - details of Hitler's personal life never before known, and fascinating new perspectives on a number of well-known events. Many falsehoods are exposed and distortions set right.

But more remarkably, John Toland has given shape and meaning to the vast wealth of detail assembled here. It is an extraordinary, brilliant work of biography, of military, social, and political history.